This SAC located in the coastal strip presents three differentiated ecological units. The mouth of the river Miera in the Bay of Santander, through the Ria de Cubas; The El Puntal-Somo-Loredo dune system; And the islands of Santa Marina and Mouro.

The central element of this SAC is the extensive dune system that extends from Loredo to Punta Rabiosa for more than 4 kilometers. This system is in constant evolution, dependent on the marine dynamics and the sedimentary contributions coming from the river Miera and the Bay of Santander.

Thus, the eastern part of the system, near Loredo, is undergoing erosive processes with a progressive disappearance of the dunes of this area. While in the central zone, in the surroundings of Somo, there is an erosion-sedimentation equilibrium. The western end is characterized by a predominance of sedimentation, which causes a constant growth of Punta Rabiosa in a westerly direction, penetrating more and more in the Bay of Santander.

In addition, the estuary of the Miera has extensive intertidal zones, occupied by sandbanks and muds on which halophilous scrubs develop, with a succession of plant associations conditioned by the degree of marine influence, all of them of notable ecological importance.

The habitats that occupy the largest surface are all shallow areas covered by water, that is, estuaries and large coves and shallow bays. On its banks, different halophytic formations appear, such as annual pioneer vegetation with Salicornia and other species of muddy or sandy areas, Atlantic saline grasslands, Mediterranean halophilic and thermo-Atlantic shrublands. More inland, the formation of dry Atlantic coastal heathers of Erica vagans should be highlighted. 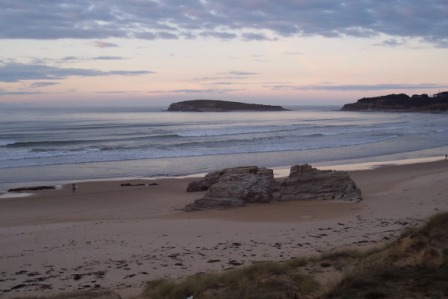