The Southern Damselfly (Coenagrion mercuriale) is a small devil’s horse, as it is popularly known, or zygoptero of the Coenagrionidae family, with males of intense sky blue color and a pattern of abdominal black spots with a spot in the form of “helmet of God Mercury” in its second segment, which allows to differentiate the species from similar ones. The females, in addition, have a less striking green coloration. 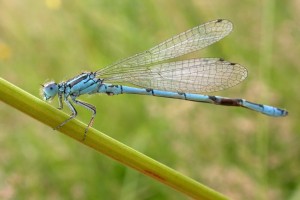 In the Iberian Peninsula, although it has extensive populations, they present a fragmented distribution. In Cantabria there are very few bibliographical citations, partly due to the scarce sampling effort shown. That is why these censuses and studies on the species are of vital importance to know the status of their real populations and therefore their state of conservation, thus allowing to adopt appropriate conservation measures. Anthropic actions, specifically the intensification of agriculture, over the environment are the main direct threat to the status of conservation of the devil’s horse damselfly.

LIFE Miera has implemented an inventory of the insect population in the Natura 2000 areas of the Miera Basin, which has made possible to locate 6 populations of this damselfly, associated with small streams of clean and running water with herbaceous vegetation in the banks, where the couple of the species takes advantage to place their eggs and the larvae where they spend a good part of their lives.

In addition, work is being done on the declaration of an entomological reserve endorsed by the Spanish Entomology Association dedicated to the protection and knowledge of the Southern Damselfly. On the other hand, various education, training and environmental awareness activities have been carried out, boosted at naturalistic sectors, local population, farmers and schoolchildren.