The LIFE Miera Project hosts among its objectives the restoration and creation of new riverside forests along the Miera river basin through native tree plantations. After collecting the seed of these species in the areas of action, the plant is grown in the El Pendo Forest Nursery. Species such as the alder, the white willow or the ash grow again on the banks of the Miera and its tributaries, increasing the width of the riverbank, up to 8 meters in some areas, and creating favorable shelters for mammals such as the otter. Thus it has been possible to recover about 3 kilometers of fluvial riverbank, in the middle course of the Miera River, the middle course of the Pontones River and the headwaters of the Bernallán and Rucabao streams.

For this, FNYH has carried out the acquisition of parcels of land linked to the river bank, as well as land stewardship agreements with private owners interested in improving the quality of the river habitat, making it possible for the otter, salmon and other species linked to the river that will profit from it.

In addition, to evaluate the success of the restoration action, monitoring of the growth of riverbank trees is carried out and riverbank vegetation quality indexes, such as QBR. They are applied to detect the weak points that exist in the river banks and act to overcome them. 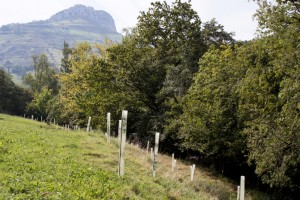