Woodwardia radicans is a fern or pteridophyte, known as píjara, which survives as a relict species, legacy of warmer climatic conditions existing in Europe during the Tertiary Era. In the Cantabrian Coast, tends to appear in ravines on the banks of rivers and streams, riverside forests, gorges, always in the shade and at low altitude. It is very vulnerable to freezing conditions. The status of conservation of the population in Cantabria is classified as unfavorable or inadequate. 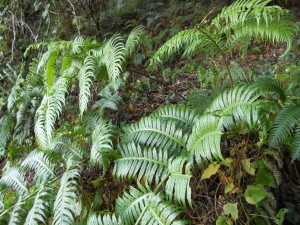 In order to determine the conservation status of this fern in the Miera Basin, an inventory has been made along the river courses included in the Natura 2000 areas of the Basin. This has allowed locating three populations of the species and analyzing the threats for their conservation.

Thus, restoration work has been started with the different populations, aimedat reducing species of competitor flora, such as the pampas grass or male fern; to the creation of shaded areas by planting native species; and the reinforcement of populations, by planting some specimens.

Due to its uniqueness and evolutionary exclusivity, Woodwardia radicans constitutes a priority target species for conservation programs that use ex situ techniques. Therefore, LIFE Miera through El Pendo Forest Nursery has carried out the reproduction of the species through planting apical buds or bulbils.