The Lucanus cervus is one of the largest beetles in Europe and belongs to the Lucanidae family. It presents a marked sexual dimorphism, with the males having a large antlers that they use to fight aggressively for the females. The species evidences twilight habits that focus on these disputes in order to fecundate the female. Although it is associated with Quercinea (Quercus sp.), It is a highly polyphagous invertebrate always linked to hardwood and riverbank forests. It is an umbrella species, protecting its habitat boosts many other species that live in its own ecosystem; birds, mammals, amphibians and reptiles.

LIFE Miera has implemented an inventory of the population of stag beetle in the Natura 2000 areas of the Miera Basin, which has made possible to locate 11 populations of this beetle, both on the upper course of the Miera River and in the vicinity of its mouth and in its main streams. Through three land stewardship agreements it has been possible to involve local administrations and private owners in the implementation of good management practices that improve the habitat of the “flying deer” beetle as it is popularly known. The oak forest has been rejuvenated, insect pyramids have been built to work as a refuge and food area for flying deer beetle larvae, explanatory signage has been installed and awareness-raising and volunteering activities have been developed to create an insect hotel, which boost not only the flying deer beetle, but a multitude of beneficial insects for the ecosystem.

In addition, work is being done on the declaration of, at least, an entomological reserve endorsed by the Spanish Entomology Association dedicated to the protection and knowledge of flying deer beetle. This reserve will be made in collaboration with the local government of Liérganes village, thanks to a signed land stewardship agreement. 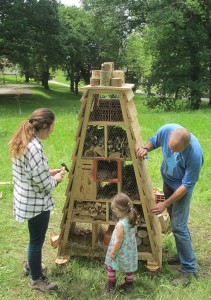