It is located in the eastern end of the Cantabrian Mountains, covering the headwaters of the rivers Pas, Miera and Asón. It comprises the Castro Valnera massifs to the southwest, Alto Asón in the central sector and the Sierra de Hornijo over the north-eastern extreme. Inside, there is the Natural Park of the Collados del Asón. The massifs that make up this SCI reachs modest altitudes, being the maximum elevation slightly higher than 1,700 meters (Castro Valnera, 1,718 meters), but with important slopes, typical of higher mountains, given the proximity of the sea and that the Valleys are located in even lower levels than 100 meters (the minimum level of the SCI is 75 meters above sea level). Its material is terrigenous to the southwest, becoming progressively calcareous towards the northeast.

As a consequence of the extension of the calcareous massifs and a very rainy climatology, a great karst develops that favors the existence of multiple caves in which eight species of chiroptera from Annex II of the Habitats Directive are present. Peat bogs are abundant, with important problems associated with overgrazing.

Among the animal species of greatest interest present are the wolf that despite its disappearance on the 1970s, a recolonization is taking place that, if consolidated, would cause its expansion towards the pre-Pyrenean mountain ranges. There are also other species such as roe deer, wild boar, Eurasian woodcock, grey partridge and hare.

In limestone cliffs, up to five species of raptors are included in the Wild Bird Conservation Directive: golden eagle, Egiptian vulture, griffon vulture and Eurasian eagle-owl.

The place is characterized by an alternation of moist heaths and forests; Beech trees are conserved in medium and high heights (between 500 and 1,300 meters of altitude), that sometimes develop on spectacular limestones reliefs. At lower levels, and always on calcareous areas, there are important masses of oak, whose main support is the lithological aridity, thanks to which they survive in a climate so humid. 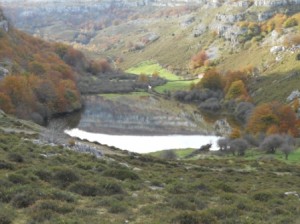 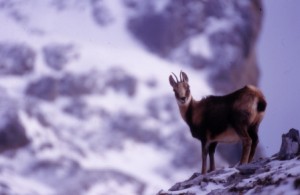